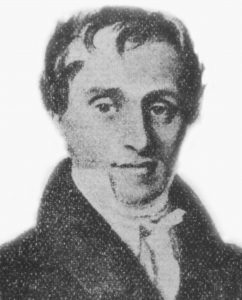 SHORT BIOGRAPHY OF ROBERT CEARD, FOUNDER OF THE BATTALION

Nicolas Céard’s eldest son, Robert was born on 17 September 1781 in Versoix in the Montfleury countryside.

He joined the Academy of Geneva and passed his doctorate in Paris on 15 April 1806. Back in Geneva, he practiced as a lawyer. On 22 June 1809, Robert Céard got married to Beatrix-Judith, daughter of Pierre Boin, “conseiller d’État” (~State Councilor). In 1811, he became “substitut du procureur impérial” (~deputy imperial prosecutor).

On 15 October 1814, he obtained permanent right of citizenship in Geneva and became a Swiss citizen, as the Canton got part of the Confederation. On 17 December 1821, Robert Céard became “procureur général” (~attorney general). In 1835, the “Conseil d’État” (~council of State) appointed him “Commandant” (~commander) of the Fire Brigade of the City of Geneva.

On 29 May 1840, at the head of his staff and surrounded by three entire companies equipped with arms and uniforms, Robert Céard received the keys to eight pumps depots holding the whole fire-fighting equipment of Geneva.

THE FIREFIGHTERS’ BATTALION OF THE CITY OF GENEVA WAS BORN!

On 24 June 1840, the battalion received the baptism of fire at the Rue du Port. Sergent James died as he was controlling his pump.

On 13 September 1841, the battalion passed its first inspection in front of the “Chambre municipal”, on the Grand Quai.

At the beginning of 1848, Céard offered his resignation for health reasons.

On 3 May 1860, Lieutenant-Colonel Céard passed away amid his firefighters’ affection. He was buried with military honors and now rests in the Plainpalais cemetery. The city honors his memory by giving his name to a street. 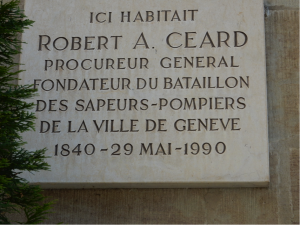